We all have strange relationships with punctuation — do you overuse exclamation marks? Do you avoid semicolons like the plague? What type of punctuation could you never live without? Tell us all about your punctuation quirks! —The Daily Post 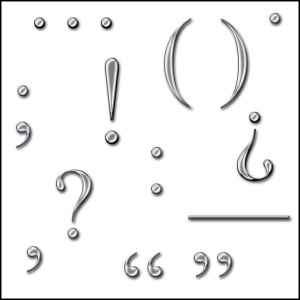 My favorite punctuation marks—favorite in the sense of having a favorite color: something you like and take pleasure from—are two symbols that I almost never get to use: the inverted question mark and exclamation point in Spanish. They’re so wonderfully practical, letting you know ASAP that you’re heading into a question or an excited declaration. Sure, question words like “who” or “how” can clue you in, but they can be misleading, What was his name? and How are you? are obviously questions, but What a disaster! or How rude! aren’t. (Luckily, English-speakers get other clues to help.) But beyond their usefulness, I like their appearance: familiar, yet unexpected. If I read Spanish more often, I’d probably get used to them and not notice them any longer, but for now they’re rare enough to still be special.

As for English, the language I do use, I don’t have a favorite-like-a-favorite-color punctuation mark. But you’ll find some of them in my writing more than others. I lean towards too many parentheses. I’ve finally learned to let them pop up naturally as I write and then thin them out while editing, because else I tie myself in knots trying to work around them. I’m trying to use the em dash more as a substitute, but I don’t think I’m fooling anyone. Hey, they say it’s a good thing to find your writing voice, and I have. It happens to be a voice with a lot of parenthetical asides. I use quite a few ellipses as well. I was happy to discover that there’s an ellipses character. Perhaps you’re thinking, You find it difficult to type three periods in a row?. No, but when a computer considers the ellipses a single character, it doesn’t break it up at the end of a line. The single-character ellipses also saves me two characters in Twitter. See? Useful.

Other than that, my punctuation uses are pretty mainstream. Oxford comma? Yes. Semicolons? A tad formal for everyday writing, but I find uses for them. Just because something is a bit stiff doesn’t make it wrong. Apostrophes? Little land mines, each and every one of them, but worth the effort. Periods? A basic staple, and probably not appreciated nearly as much as they deserve. I mostly obsess over them when writing one-sentence photo captions. Use them? Don’t use them? Yes, I think about things like this.