There is a market out there for really big cookware. I’ve seen a paella pan available for rent from one of the local cooking stores that could double as an adult-sized snow disc. Le Creuset sells a 13¼-quart Dutch oven that I’d like to see someday. I can’t imagine ever having a use for it and I wouldn’t want to spend over $400 for a pot, but it sounds like it’s a mighty impressive piece of cookware and worth a look. Even if I could think of something to cook in it, it weighs 22 pounds, empty. Filled, I’d never be able to lift it. Perhaps the 13¼-quart behemoth is a rare purchase for anyone, but Le Creuset also sells a 9-quart model, coming in at a mere 18 pounds. Someone must be buying these things, right?

Me, I hang out at the other end of the cookware size continuum. If you’re just cooking for one, you can use cookware that’s verges on cute. 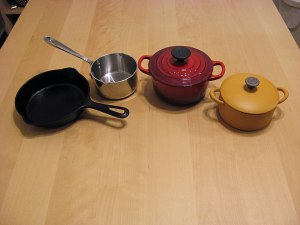 The cast iron skillet (6½” diameter) was my grandmother’s. My mother never used it, something I chalk up to being sold on the wonders of Teflon. She left it and its larger companions in a cabinet, where every now and then I’d find them and pull out the smallest one to look at. Even when it hasn’t been made into a humongous Dutch oven, cast iron is heavy; this skillet was the only one I could lift without a struggle. Decades later, when I inherited the cookware, I finally got to use the little skillet for real. It’s the perfect size to fry a single egg, and after almost a century, the iron is so well-seasoned that the egg slides over it as if it were nonstick. Except that this is nonstick you can use metal utensils with.

The technical name for the little saucepan is “butter warmer.” I do melt butter in it a lot. But with its 2-cup capacity, it’s also a fine pan for heating a bit of spaghetti sauce in. There are saucepans smaller than this, but I’ve learned to avoid them. A saucepan so small that it isn’t stable on a stove burner is more dangerous than cute. Sometimes the handle weighs more than the bowl part, causing the saucepan to tip over; sometimes the bottom is so small that it can’t balance on the burner. Sometimes both. (Be reassured that I learned all this without enduring an actual injury or fire.) This ½-quart saucepan, though, is heavy for its size and large enough to rest firmly on a burner. Now if only I could find a lid for it.

The same company that makes giant Dutch ovens makes smaller ones as well. This little red pot is their ¾-quart Dutch oven. I admit I don’t use it as much as its larger siblings, but it’s perfect for a single serving of nabemono, a Japanese one-pot dish that makes dreadful leftovers (which is why I’d go to all the trouble of cooking just one serving of it). The even tinier (2-cup) yellow pot can be used to bake a single beet. Yes, I do things like that.

Of course most of my cookware and bakeware is “normal” size, with pots in the 2- to 4-quart range, and most of the time I make a full recipe’s worth of food and dine on the leftovers for days afterwards. But for those times when preparing just one serving of something makes the most sense, I’ve ended up with a good selection of equipment to handle that.

I have long plotted to make a vanilla cake that would hit the eater with vanilla the way a good chocolate cake just says chocolate. Not being much of a baking improviser, though, I wasn’t sure how to go about it. Maybe we should be just a tad concerned that two popular kinds of cake are called “white” and “yellow.” These are not flavors unless you have synesthesia. And I wasn’t sure how to turn either of them into a vanilla cake. Apparently vanilla is hitting new levels of popularity, however, because eventually I ran across a French vanilla cake mix.

I confess, I didn’t have much confidence in the vanillaness of the cake mix. This is when things started getting complicated. I wasn’t sure how well vanilla extract would hold up in baking conditions–the stuff has a high alcohol content after all, and doesn’t alcohol evaporate?–so I thought I’d go all foodie and add a vanilla bean. Acquiring a bean wasn’t difficult, as I’m in walking distance of a gourmet spice store (three beans, sold in a glass test tube that just cries out to be repurposed for something, only I can’t think of what). Using the bean, on the other hand, was a bit of a struggle.

Meet your basic vanilla bean. Yes, there are pictures of them on vanilla extract containers, but the bean itself is maybe not quite what you expect. It’s longer than I thought it would be, coming in at about 7″ long. We’re talking the seed pod of the vanilla orchid here–and by the way, how did anyone ever think, “Hey, what would happen if I slit open this pod and scraped the innards into my food?”–so what you’ve got is something that looks like a long dark brown (almost black) string bean, dried enough to get all wrinkly and look like leather. Optimally, your vanilla bean hasn’t dried out, though. So when you get it open, you’ve got this moist black paste sticking to your knife, your fingers, your cutting board: everything, in fact, except the bowl you’re trying to get it into. And those seeds are tiny: maybe about half the size of a grain of sand. The seeds all clump together and you wonder how you’re ever going to get them evenly distributed through the rest of the ingredients. It’s also a source of wonder: how can something that tiny, even if there are lots of them, flavor your dish?

You’re also not supposed to toss the pod. For what you’ve paid for it, you probably will want to find a use for it. Rumor has it that companies grind the pods up and add them to their “vanilla bean” flavored products, even though the pod has only a fraction of the flavor of the seeds (like you’re going to know the difference between a near-microscopic vanilla seed and a near-microscopic bit of ground-up vanilla bean pod?). The home cook, will probably take a simpler approach. I keep being told to put the pods in a jar and bury them in sugar to make vanilla sugar. Fine idea. Now if only I could think of something to do with all that vanilla sugar. Eating it by the spoonful seems a mite decadent.

And by the way, without long explanation (bad egg), the cake with the vanilla bean in it never made it to the oven. A later experiment with the French vanilla cake mix however, showed that it had little discernable vanilla flavor. I’m getting a tiny ego-boost from having guessed right, but must now try from-scratch recipes. Probably lots of them. Tons of vanilla cake. Oh, the horror…